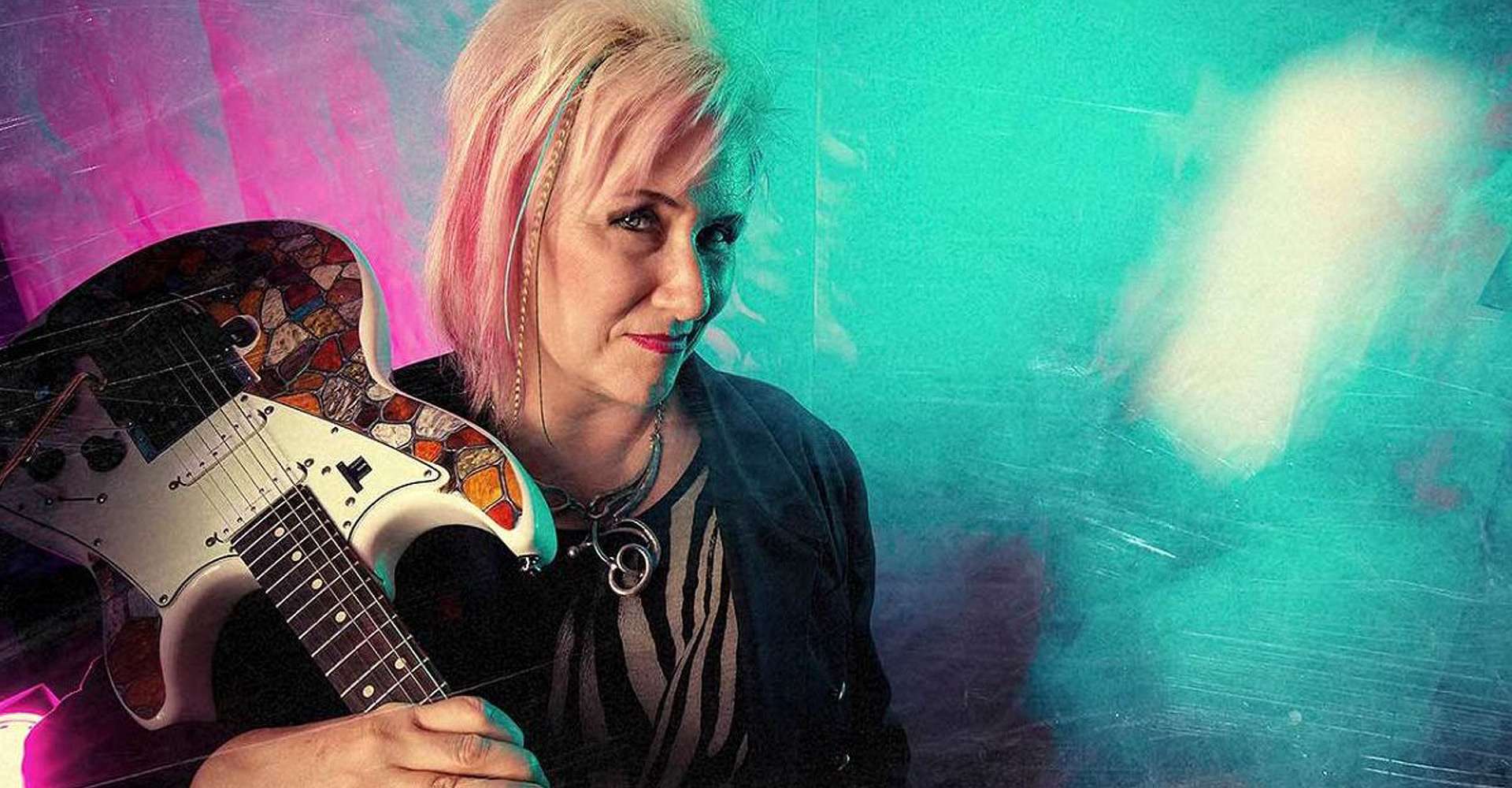 Interview: An audience with Jennifer Batten

Superbowl XXVII, January 31st 1993. An audience of 90,000 fills the Rose Bowl in California. The Dallas Cowboys lead the Buffalo Bills 28-10 at halftime, and over 133 million Americans turn their attention to the true main event of the day – a live television appearance from the world's greatest living pop star. By the time the global viewing audience is factored in, the figures for those watching swell to incomprehensible numbers. With anticipation at fever pitch, one woman stands beneath the stage, alone with her guitar, ready to rock over 1.3 billion people around the world.

'That was the only time I ever saw Michael remotely nervous...'

Jennifer Batten has seen some sights during her remarkable career and the historic Superbowl show of 1993 remains a highlight.

The biggest gig of them all

Jennifer Batten: 'Not during the performance itself, but in rehearsals he was a little bit...scatty (taps the side of her head and laughs). You had to really know what to look for to see it, and I had worked with him long enough by then to spot the signs. He didn't give a lot away, but that show was definitely a big deal, even for him.

Gear: 1.3 billion! That would have accounted for something like one in every five people on planet earth at the time.

JB: (laughs again) 'Oh, man, the crowds on the Dangerous tour were just unbelievable. You couldn't even imagine...I mean they were quite literally dangerous. All those people in one place, it was terrifying. I believe the biggest crowd we ever played to was here in England...in Liverpool, like 110,000 people.'

From small beginnings in her native New York, receiving a 'Beatlesy' electric guitar for Christmas aged 8 in 1967, Jennifer quickly took her first guitar lessons, before enrolling at the Guitar Institute of Technology in 1978. 'Oh, that place kicked my butt! You start there and there are pictures of Joe Pass and Pat Martino on the wall, and you're young, and you think you're pretty good - you think one day you'll be as good as your heroes...and of course you never get there...but hopefully you get somewhere close while developing your own thing along the way.'

The Good, the Bad and the Dangerous

Gear: Did Michael ever let you off the leash when it came to soloing, or did he have specific requirements for each song?

JB: Some of the time he left it open-ended. Y'know, I'd have 16 bars and I could play whatever the heck I wanted, play it different each night. But a lot of it was dictated by the audience, in actual fact. Take a song like 'Beat It', with Eddie's (Van Halen) wonderful solo - people wanted to hear that solo when they came to the show. So that one I wouldn't improvise, I'd play it the way Eddie played it on the record. And I can't complain about that.'

Jennifer went on to complete three world tours with Michael – Bad in '87-'89, Dangerous in '92-'93 and HIStory in '96-'97. 'With Michael, the shows were so big that we only ever played two or three nights a week, so I was fortunate enough to see a lot of the world while we were out on the road. We played just about everywhere and I had some wonderful experiences. And, y'know, it bought me a house too...(laughter).'

Amongst those experiences was a long-awaited encounter with her all-time guitar hero.

JB: 'We were due to be in London with the Dangerous tour in 1992, and Jeff Beck had called. He wanted to come along to the show. And then, what do you know, we got to London and the show was cancelled. So I was going out of my mind trying to get in touch with him. I was like 'Jeff Beck's gotta be somewhere in this country, and somebody must have a phone number or a way to get in touch with him!' Well eventually I did manage to track him down and later we spent three years on tour together.

Gear: As good as you imagined?

JB: Oh, just great. Jeff loves to party. He would always make sure we had two bottles of champagne and orange juice backstage!'

Gear: Were there any nerves for you, playing with such a big musical influence?

JB: 'Oh sure, a little at the start. But that's always the case when you play in front of people you admire, I think. In fact, I remember a show Jeff and I played where Steve Vai was in the audience, like three rows from the front, right in the centre. Can you imagine that, Vai watching your every move?!'

Gear: Jeff Beck usually talks more about his cars than his guitars; is he really as 'anti-guitar' as he makes out?

JB: 'Nooo. I mean he's not a guy that's going to sit down and work on scales, but he watches a lot of television and he's never without a guitar in his hands. He's always there, noodling, ready for inspiration to strike...and to watch him play is so educational. I had copped every solo from 'Blow by Blow' and 'Wired', but to see him playing them his way, the ways he gets around the instrument, you learn so much just from watching him.'

Jennifer has always sought out forward-looking gear to accommodate her innovative playing techniques. At the heart of her compact and portable guitar rig in 2018 is theBluGuitar AMP1, a unit she credits with 'changing everything.'

JB: You ask any guitar player who's tried carrying their favourite 100 watt amp up four flights of stairs to a show, you can fall out of love with an amp very quickly, no matter how good it sounds. But with this, the AMP1, it's a 100 watt tube head that you can put in your purse!'

Gear: How did you come to be involved with Thomas Blug and BluGuitar?

JB: Well I had met Thomas at trade shows, and I knew he was a lovely man and a fantastic guitar player, but I had no idea he was an inventor too. We got talking one time and he invited me to his house to try out this product he was working on. I walked into his living room and he just had every pedal ever made laid on the floor (laughter). And then he hands me this (the Amp1). I call Thomas Blug the Einstein of sound, because he thinks of everything. The Amp1 is a four channel, 100 watt tube-driven amplifier, with boost and reverb built in; it's even curved underneath so you can sit it on top of your speaker cabinet and the handle doesn't get in the way. From the first time I played through it I was just saying to Thomas 'I wannit, I wannit, gimme it, gimme it!' Gear: You think back 50 years, Hendrix and Cream rolling into town with four or five Marshall stacks, pedals the size of shoeboxes...it's only really in the last few years that companies seem to have said 'We could make this smaller, lighter and more user-friendly, without sacrificing the tone.' Why do you think it's taken guitar gear so long to shrink in size?

JB: I think a lot of it has to do with tradition, the name of a product, y'know, the brand – people think they need a certain amp because that's what their heroes played, way back when. But again, you try hauling a 4x12 speaker cabinet up stairs...and that's the amazing thing about the BluGuitar gear. Even the cabs, the Nanocab, theFatcab and this new Twincab, they're so light. And with this thing (picks up BluBoxspeaker simulator) you don't need even need a cab. I've arrived at a show before and they've not seen the rider, they don't have a 4x12 for me, so I've plugged straight into my BluBox, then into the desk, and it's saved my ass because it just sounds amazing. In fact, this is how much I love it - I recently gave away my collection of vintage microphones. That's how good it is.'

The future of electric guitar

Jennifer's live show, like her particular brand of guitar genius, is typically idiosyncratic; her next level shredding combines with a constantly-shifting moving picture display, producing a relentless assault on the senses. 'I've definitely embraced the visuals,' Jennifer explains. 'In fact my last album was released as a DVD, so I'm really into the film-making...maybe even more so than the music now!'

However, with the promise of new and improved BluGuitar products arriving in the future, Jennifer won't be ditching guitar playing anytime soon.

JB: 'I haven't actually seen what Thomas is working on yet, but I know he's always thinking of new mods, always tweaking things, and whatever he does, you know it's going to be fantastic.'

Gear: And what of the calls on the internet for Herr Blug to produce a JB signature AMP1?

JB: Oh, listen, I have no interest in making a Jennifer Batten signature model...I'm perfectly happy with the current version, and whatever Thomas comes up with next, I'll be excited to hear how that sounds. Cos y'know, sound is everything.'